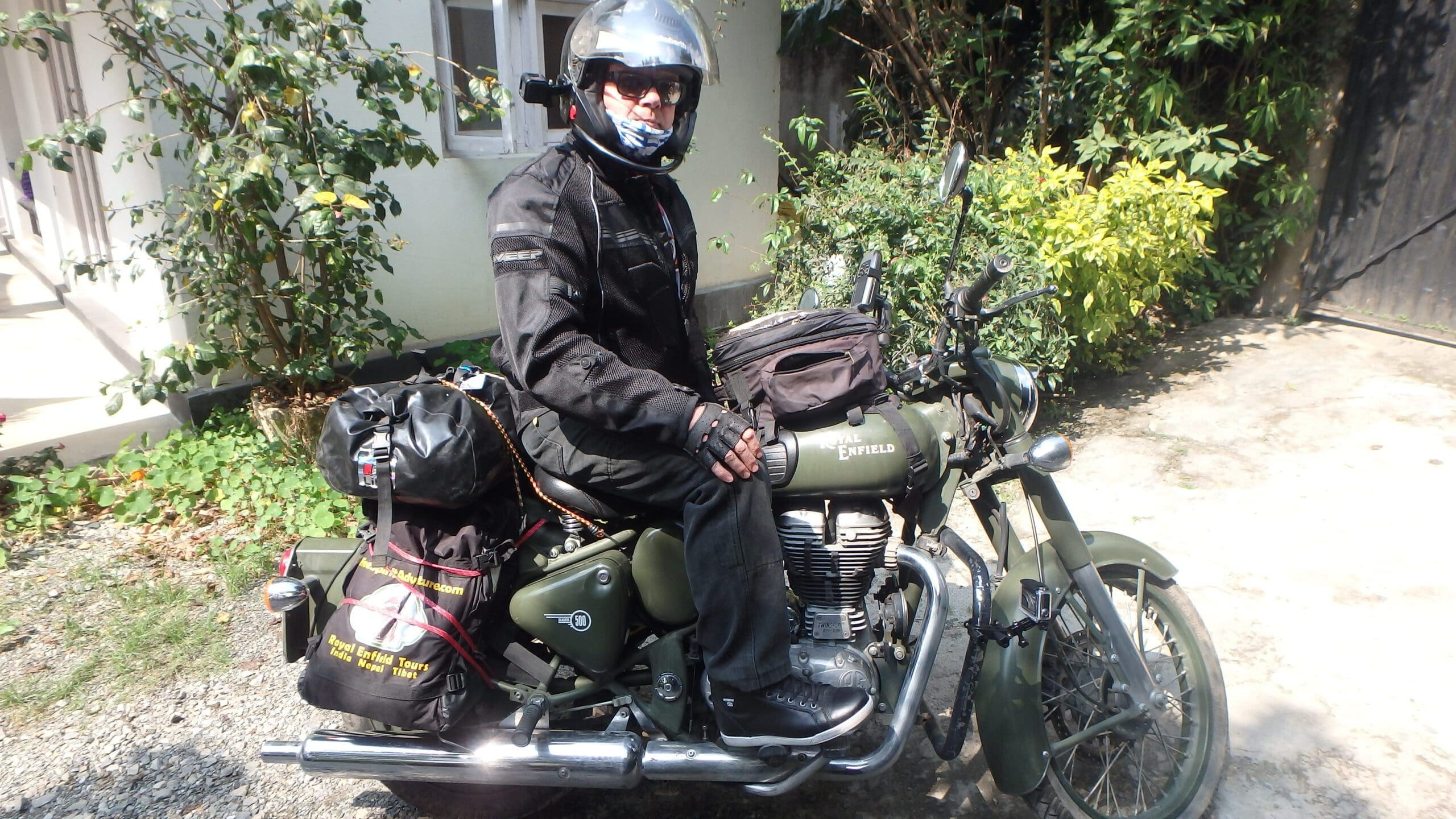 A really intensive ride today of some 5 hours and 150 km. At least an hour was spent getting out from the city. Getting into the rhythm of the traffic takes a moment. Although there is alot of traffic around, it is relatively slow paced. If you keep it that way, nasty surprises can be avoided. Today anyway. In any case, Kathmandu even under fuel shortage is something else. The goal today, my first on the bike,  is Bandipur, a rather remote village on a hill top. 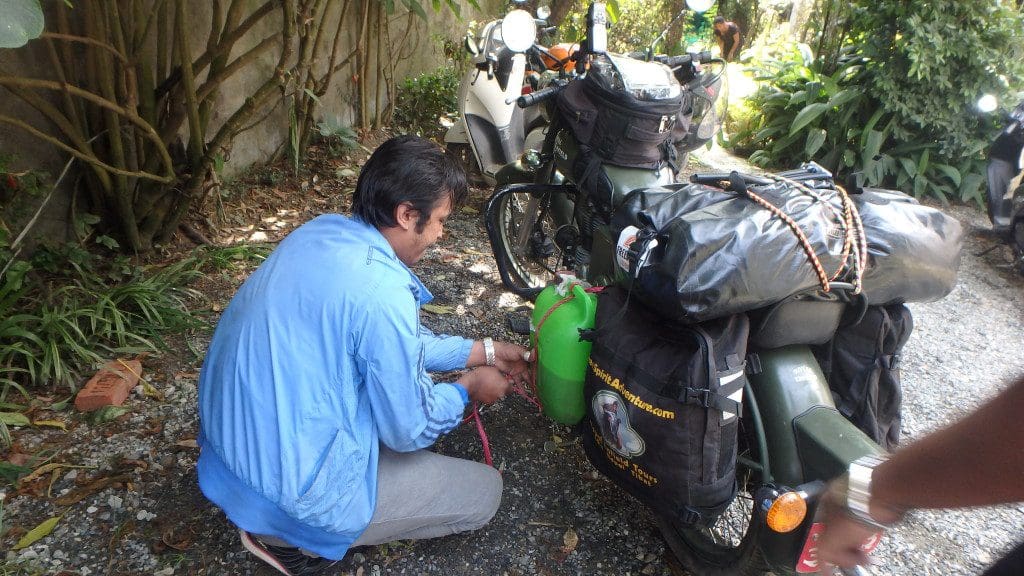 The bike was delivered in the Morning and after gearing up the bike – not forgetting the precious spare fuel canister – I was set to go. The very helpful guys who brought the bike helped me navigate the first miles and showed me to the right direction. With hindsight, a very good idea. Once leaving Kathmandu behind, the traffic started to flow. Even though the traffic is left handed, not everyone seems to know. Climbing the hills, trucks and other unnamed vehicles started to struggle with the ascent and passing them happens based on one’s nerves. Average speed must have been easily under 60km even on the main road. Perhaps 50km/h. On the way, I also met Ram, who had made my ride possible. He was out with three guys on KTMs and has their bikes parked in his garage . That is when the guys themselves are not here. Now there’s an idea! Severi beware -or get a larger garage! Funny how the three KTM’s stood out from the locals (they may have been GS’s but who cares, they all look alike!). 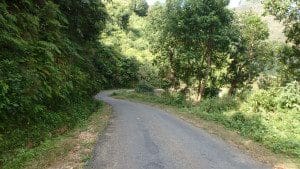 I was warned about the traffic that is normally really difficult for the the last eight miles before Bandipur, where the road can barely fit one car. This was expected to be a challenge. The road proved to be another hoot, turn after turn on a paved cow path. And no one else in sight! The Indian blockade at the border has really taken its toll here. I stayed at the fancy Banbdipur Palace Hotel for 15 USD per night. The young, extremely polite guy, who seemed to do all roles from receptionist to serving dinner told 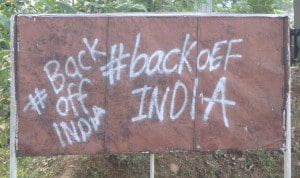 me that now should be the high season but they have no visitors due to fuel shortage. Really bad for the guy who told me he was almost local. He lives only two hours away, ON FOOT, he says! Puts many of us in shame! Bed time now. I am sure to sleep well with the petrol fumes… with so many crawlers climbing the walls, and MY BED, that’s only good. As long as my little precious fuel next to bed is safe.

Pokhara is a rather large and apparently a very central location for trekkers, drafters, sky divers, bungee jumpers, Yeti hunters, hippies, you name it. Lakeside is where the fun is and that is also where I am. Hotel Monal and another 15 USD per night. Good value. To top all expectations, I was even able to do some candle lit shopping! Electricity is cut off unexpectedly but businesses are ready for it. To make life a little easier and not needing to gear up the bike every morning (also being short of fuel) I will spend two nights here and make a slightly shorter trip tomorrow to Dhampus. Loking forward to seeing some real mountains – Machhapuchhre for one! 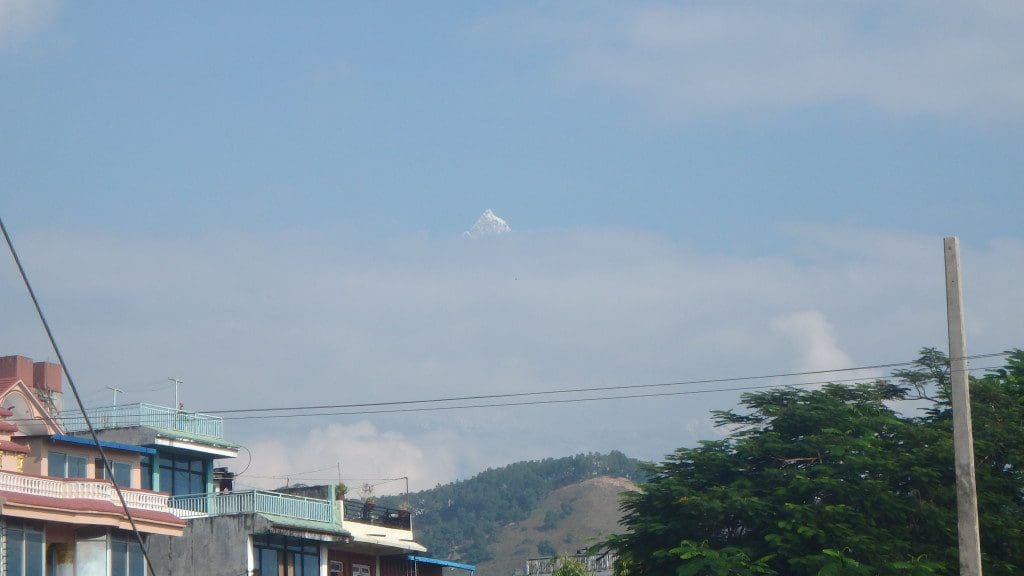 Running out of fuel, I set off to Dhampus checking every petrol station on the way. All closed and no one in sight. Petrol light flashing on the bike. Lack of petrol could not spoil the fantastic views in the distance, the Himalayas! The road leading to the village of Dhampus is a 10 km narrow stretch of dirt, mud and stones of different shape and size 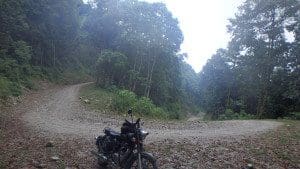 . The road itself was an experience and exciting as such, disappointingly the clouds came in before my arrival and I missed the best views. Clouds blocked the views up but I got to see the views down. On the way back I stopped at a military compound to check if I could get fuel from there. The military Police guarding the gate were really good fun to talk with. We ended up chatting for some 45 minutes, I showed them army pictures of my two sons  and we discussed the situation at the border. The end result was that they might be getting fuel some time tomorrow. No idea when. Already there were vehicles parking at the gate to get the pole position in the queue. Read more about the situation and politics behind it here. The roads are becoming empty and are taken over by cows, goats and dogs. 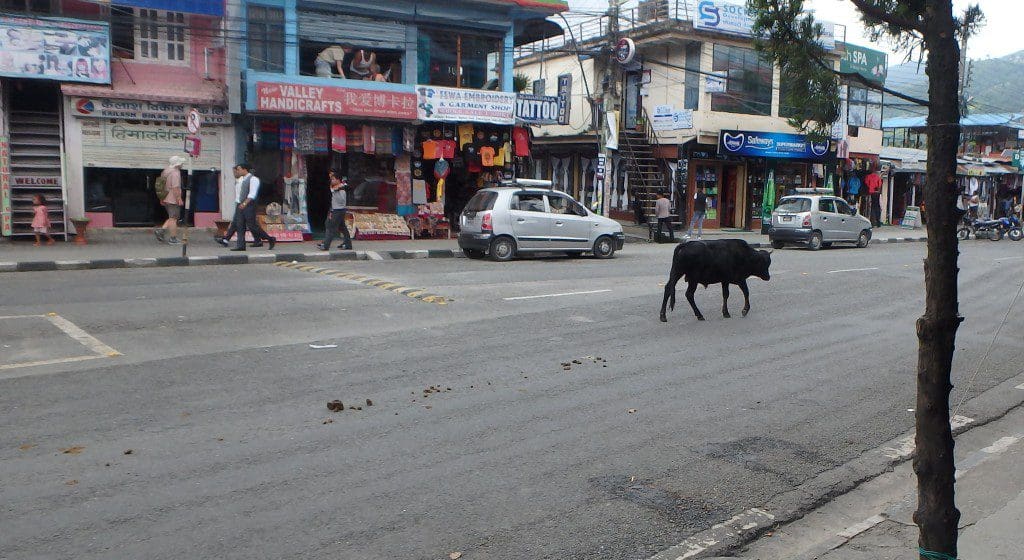 As I needed to continue my trip in the Morning, another day’s wait was not what I needed. So all ideas out and trying all contacts. With a bit of luck I got both petrol and excitement and I am set to go in the Morning.

The word is that only one truck with diesel has passed through the border. Fuel price may still be rising. I also have with me my trusted canister with 5 liters of petrol, fumes providing me colourful dreams at night. No way I would leave it outside!