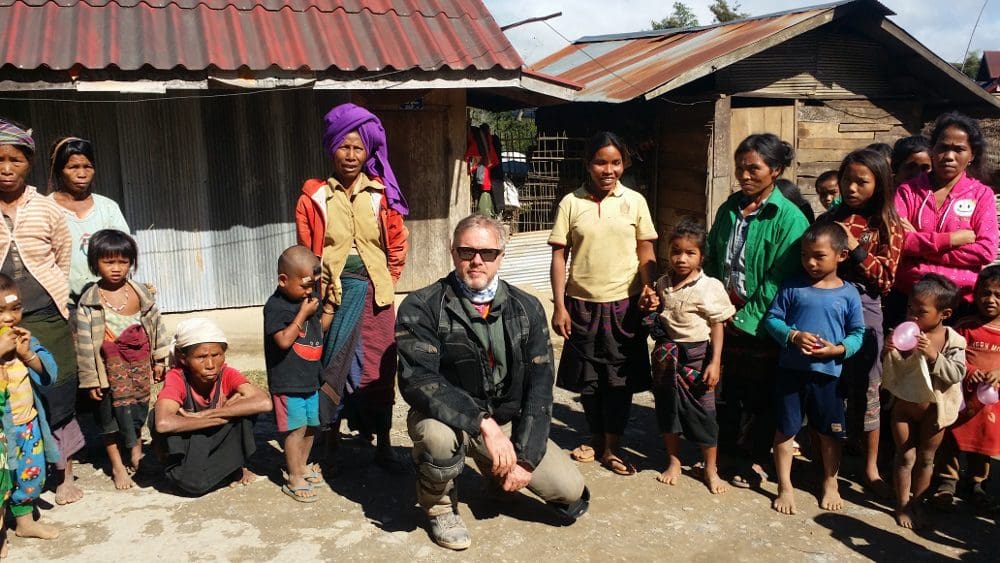 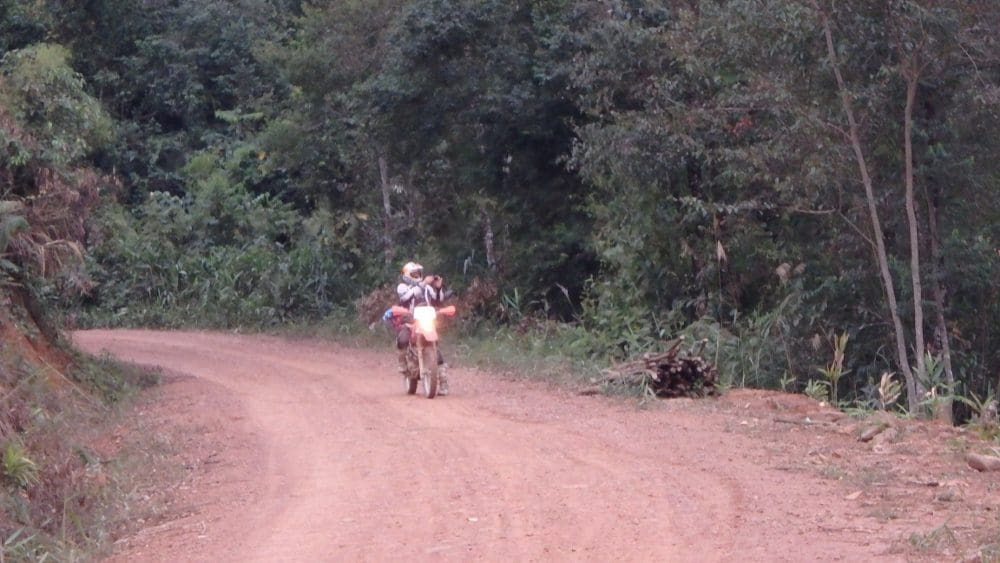 Day of two halves. Don turned up as we were taking a break waiting for a tyre repair and two guys getting astray on the wrong road, they missed a turn. Rest of the ride in two groups to secure arrival in daylight.

Last 50 km in three hours. Rain yesterday, now slippery mud on hillside paths. Villages were partying – as new year was on Sunday, Monday is day off and everyone was enjoying the day. In the typical Asian fashion, music was VERY loud!

We got to Muang Khoua just before sunset for dinner. One of our team got sick during the night and may need to stay behind and joined us again later in Luang Nam Tha

I was wondering about the women working and young men carrying small children. Something unique for Laos is that in the extended families, the unmarried men look after the children! 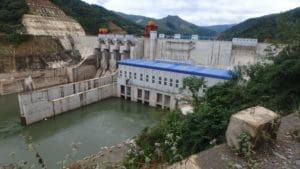 A very muddy day! As soon as we got out of M Khoua, we diverted to a new Chinese road built for a hydro energy project. The road was muddy but nothing prepared us for what we were about to encounter later that day. The lake created by the dam had cut off roads and a new thriving business was created, ferrying travelers across the lake to where the road continued on a dry land. A rather exiting ferry trip, ferry being more like a dingy, with three bikes per boat for a distance of about one kilometer.

The muddy roads on hillsides proved a challenge and we lost – and found – a bike in the bush on a very steep hillside. Rain provided extra entertainment, although I was already wet after splashing through some deep puddles a few times. 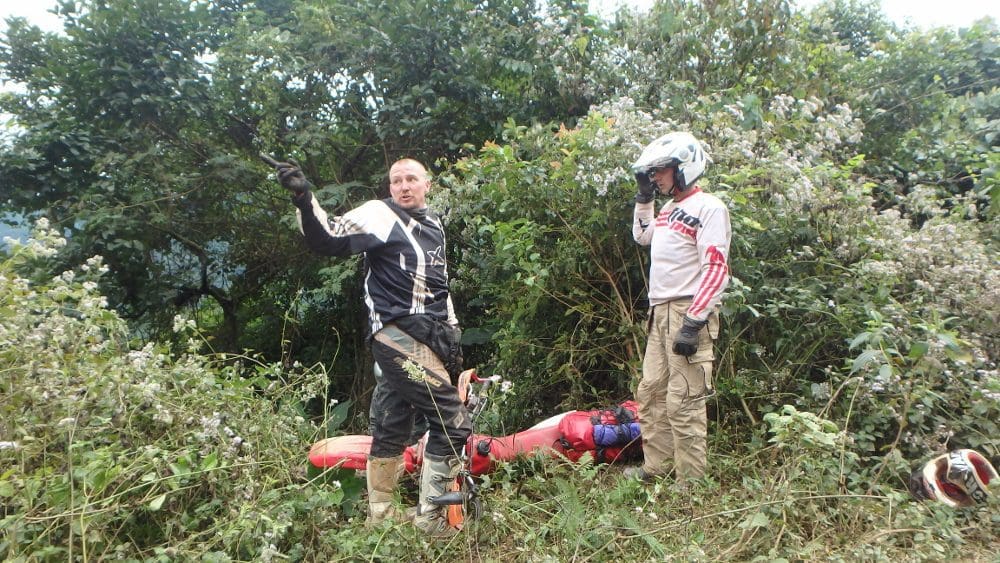 The last stretch in the dark on a tarmac/mud/crater road was again rather hard work in the darkness. Our bike lights were giving some modest guidance as to what lied ahead on the road and surprises were inevitable. Happily we reached the hotel safely with the widest of smiles at dinner in a local “pub”. The trip was hard for everyone. Luckily no injuries. Only wet and muddy clothes. I have seldom been so tired after a days ride as I was today when crashing in my bed. 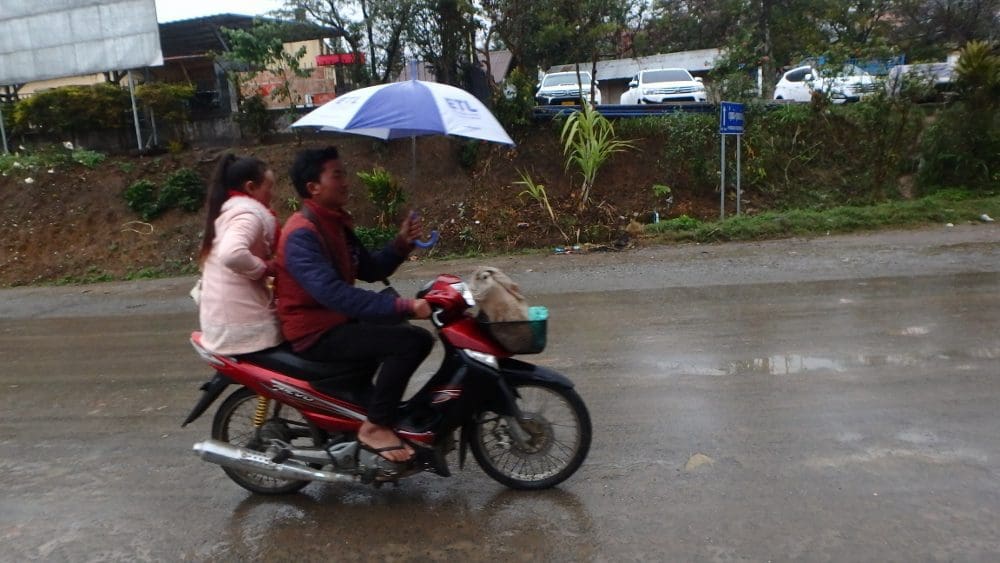 Woke up 6AM to the sound of heavy rain. Well, woke up a few times earlier for some noise through loudspeakers to the villagers. News perhaps?! Later we learned that the first notes we heard were an army wake up call for the morning exercise. We used the time in the rain for repairing the bikes. Tyre changes and fixing few hits from the road. Regardless, it looks to be a cold and rainy day…

… which it was. No Gnot Ou today. Difficult terrain in heavy rain called for a rest-day. Back in business tomorrow. The village has a Karaoke and we have a few enthusiastic singers in the group.

The day was still rainy and we opted for a more firm surface for today’s ride. Some of us wanted to test their limits on a short cut and seemed happy – and muddy – for their choice. The road was reasonably good and as we were getting closer to Luang Nam Tha the road got even better. Due to the Chinese projects they have built new roads and resurfaced new stretches.

This was a more leisurely ride, although a dirt bike is not built for highway use. Sore bum in any case after 350 km today. Luang Nam Tha seems like a more popular tourist town, compared to the remote places we came through. The forecast is even for some sun, which would be a nice change after the rain.

Local farmers market was colorful and had local produce we do not usually see in our local shop.

Trekking in the jungle

Today we did something different from riding the bikes. We needed some exercise and decided to go trekking to a minority tribe village for an overnight stay in a traditional Lao house. Trekking was tough as the terrain is hard to walk in the jungle and the path has steep hills to climb and to descend. In the jungle they had two poisonous snakes, the cobra and the green snake. Three hours trekking did the job. Enough exercise for a day.

We stayed at a Lanten tribe village. They also call themselves Indigo tribe due to their manufacture of indico colouring. They also made rubber from rubber-trees and some bamboo paper. The village was big with 300 inhabitants.

Lanten tribe is one of the 37 minority tribes in Laos. Here married women shave their eyebrows as a sign of being married. No rings. Lao marriages are not arranged and the village head will ask if the couple wants to marry. After marrying the couple usually stays with wife’s parents for a short time before moving to husbands parents, with whom they will stay and work. After a dormitory style overnight, we returned to Luang Nam Tha on the river – this time rafting. What a great day again. The sun was out and the river Nam Tha was flowing due to the earlier rain fall. Some nice rapids as well. Enough to bounce one guy off the boat! He survived with minor injuries. Lunch was served on banana leafs on the river bank. Fantastic.

Fantastic sunny day after we left Luang NamTha in s drizzle. The route we took was a little bit of a gamble as we did not know if it was passable due to hydro projects. Well it turned out to be one of the most pleasurable rides ever, taking us on small mountain roads up to to hills through quite dense jungle.

At one of the very remote villages everyone turned up to see the strange people. We made it even more exciting by flying a camera drone over the village. Those faces!! On the way from the village we got stopped by the police in a very hostile manner, although the police turned up to be very polite. After some time waiting, they allowed us to continue. No real reason was given, nor any bribes to the police. They did however know what we had been doing and how many we were. So no making a mistake that we were not been watched, even though we did not see it.

Soon we met again our friend Don, who appeared from nowhere, as he frequently did. As we did not have any booking for a hotel, he had that part quickly sorted. Pak Beng is again a bigger town and we saw some westerners on the road again. Boats from Thailand arrive each evening at 5 PM and fill the town and hotels and bars with tourists. Only to take them away the following morning 8 AM. This is again a more touristic town, though still seems rather genuine.

Great sunny morning and a fantastic ride out from town. Some photo moments on the new bridge across Mekong – yes Mekong again!

Today we split into two groups, one taking a more challenging short cut and another using tarmac road. I was ready for the challenge and after an hour and a half and progressing 5 km, we had had enough. We were knackered, done, defeated,… It was really hot in the sunshine and the rocky mountain path with it’s inclines and descends were just too much for us. We soon caught up with the other group and as today’s ride was only 200 km, the rest of the day was easy. A minor inconvenience with rain that started just before Xayaboury.

Today’s accommodation looks good, but in reality is one of some very soviet style big hotels where we appear to be the only customers. Well, it is a nice warm day and the earliest arrival to the hotel so far. But again internet is virtually nonexistent… Don mentioned this had been the case in Laos for a few days now.

This was promising to be a long day. A ride to Vientiane, some 360 km and it was already raining in the morning. Road should be good, mainly surfaced main roads. Remember, we were on small dirt bikes! A hard day ahead.

The day proved to be a great day riding. Although it rained most of the day, it was not too bad. The road was very varying over a mountain area, across Mekong on a makeshift ferry and some nice winding roads before we hit the main roads closer to Vientiane. We also managed to get invited to party with the ladies at the service station. Crickets and beer, Great! The rain stopped and we rode on a small path along the river to the city centre. A great day.

We returned our bikes to Don, had a nice dinner and went for a few farewell drinks in a local nicely designed jazz bar (?no jazz here though).

The next morning would fly us out from Laos…