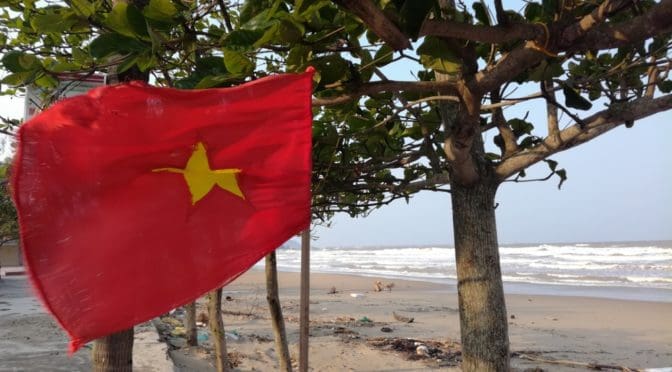 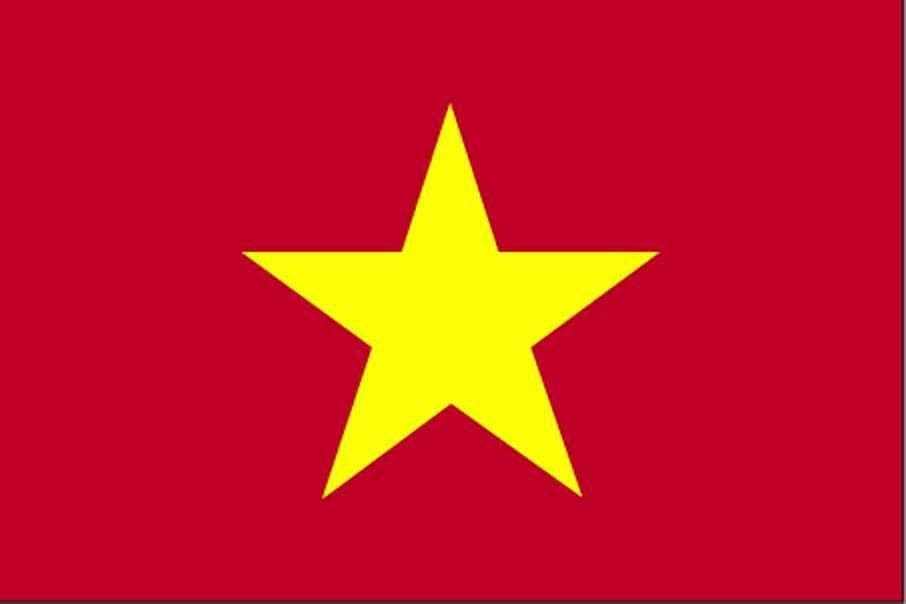 Sobering thoughts by my waiter in Hanoi

“Oh, you will be biking across Vietnam. Hmmm… ride slow, it is dangerous and you are old. It is usually younger people who do that”.

What can I say? Youth is wasted on the young!!

Inspired by Top Gear? Cheap bikes to buy at every street corner? Careless cruising across Vietnam?

So, I need a Bike

Although the web is full of accounts of fantastic rides crossing the coutry on a (Chinese) second (read: fifteenth) hand bike bought from whoever, do think twice. Young backpackers on an adventure, free of all worries, had problems with their bikes but just did not labuor the point much. Then again who would, when the story is about the fantastic journey they made?

Soon enough it became clear that instead of a crappy unreliable Chinese bike (still called a Honda), you can actually get a reliable Japanese Honda as well. Properly maintained and from a reliable source, who can help you on the way when needed. A Japanese Honda also costs about the same or even less!

Typically a Chinese bike costing 250 – 300 USD would require the same amount for repairs on the road. Repair shops may be easy to find but that kind of money buys a lot of maintenance in Vietnam. Read: Spending time at the repair shop, being charged tourist rates.

After searching my options, I went for Tigit Motorbikes . Their site is impressive and after emailing with Jon a few times, I decided to get my ride from them. All communication is in English and even payments are in pounds.
And my ride? A Honda Winner 150cc! This should take me where I want to go.

Although the traffic in Asia in general seems chaotic, it is also often relatively slow paced. A light bike is also easier to handle should the terrain turn more challenging. No dirt-biking in plans though.

OK, I also need a Route

This was more challenging. The big picture is to ride from Hanoi to Ho Chi Minh City aka Saigon. 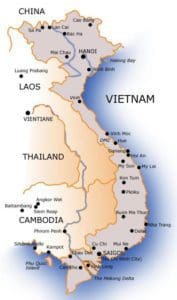 As I wanted to avoid the main roads and biggest traffic hazards,but it may not be possible all the time. Motorways are anyway off-limits for motorbikes, it is actually not legal to ride them! Vietnam is also a very thin country and getting from inland to the shore seemed easy. Therefore the plan is to ride along the western side of the country, perhaps enjoying some mountains on the way, and to visit the beaches every so often. Or the other way round!?

The rainy season should about to have just passed but rain is expected. I hope it will not be too cold though. In any case it should get dryer and warmer moving south.

Details of the route will unfold along the way.

Got the bike from Tigit and did some rounds around Hanoi to get used to the traffic, or chaos, rather. Bikes are usually parked under the watchful (?!) eye of a parking attendant and these bike parking areas are around everywhere. Overnight parking was 30.000 Vietnamese dong, approx 1,2 euro.

Hanoi is a lively city and the old town area seems to be where the party is. Vietnam is a favourite amongst backpackers, perhaps mainly due to it’s affordability. As a standard measure, a bottle of beer around 50 cents. If you go fancy, one euro.

Tigit’s advice was to double or triple what ever Google Maps suggests as travel time. This seems right and as new roads and bridges are constantly being built, you are bound to get lost a few times to add to the travel time.

Heading east from Hanoi started by crossing the Red River. Chaotic traffic was quite something to get used to. Eventually I found my way and things got a lot less hectic. Closer to the sea, the road leading to the new bridge to Cat Hai was particularly difficult to find. I used Maps.me to save bytes and should have used Google maps which had the new bridge.

To Cat Ba, there is a final crossing on a ferry. Mine was a small one and took three cars and seven bikes. Up to capacity.

Generally the roads are new and in great condition or old and in poor conditions. You will get everything. Outside the city expect cows, goats, chicken, dogs,… the usual.

Bikers day off – Cruising this time on the world heritage Lan Ha Bay and Ha Long Bay. Truly an experience made even better by a chance choice of tour operators. I went with Cat Ba Green Trail Trekking and they did a grand job. They operate their own boat and our guide Thank went out of his way to make us feel happy and safe. Thank you Thank!

It is time for Dry Ha Long Bay, which is the name for the Ninh Binh area. It is not exactly dry but is on dry!? land, i.e. not by the sea. Rock formations rise from lakes and rice fields. Just by looking around, the area is more affluent and clean. Tourism, rice and wood carving seem to be the local thing.

The scenery is beautiful and the locals have truly embraced tourism, as every single local shouts Hello! when they see me. Makes a tourist feel welcome. I stayed at the Tam Coc Bungalows and once again, very friendly staff took care of me.

I always like to try the local specialities when it comes to food. This time it was goat. Once again, perhaps I could have had something more to my taste, but I know I would have regretted not trying. Points for presentation though – Fried goat, tomato – cucumber salad and mixed fruit. My three course dinner was pricey, with two beers 170.000 dong, around €6,50 or $7,50.

Cửa Lò near Vinh is a seaside resort, which I arrived off-season. The hotel is four star luxury but the city is deserted and looks rather run-down with all the amusement rides dismantled and the beach empty. No traders, bars or anything. But there is the South China Sea!

Forecast for tomorrow is cooler and even rainy. Perhaps time to review route plans.

About costs – Meals and Hotels

Based on what I have seen so far…

Comparing prices is tricky, since you have the very cheap ones (under a fiver!) and European prices are available as well. Generally accommodation is very affordable, with good, clean rooms with own bathroom starting around $10. Hotel in Hanoi was $13, In Ha Long Bay my room with sea view was $20 per night. Room with a view behind the hotel was $11. Tam Coc waterfront Bungalow was $34 including breakfast, so slightly higher. Dorms starting at $5. Four star luxury off-season waterfront hotel at Cửa Lò, whopping $26 incl. breakfast! 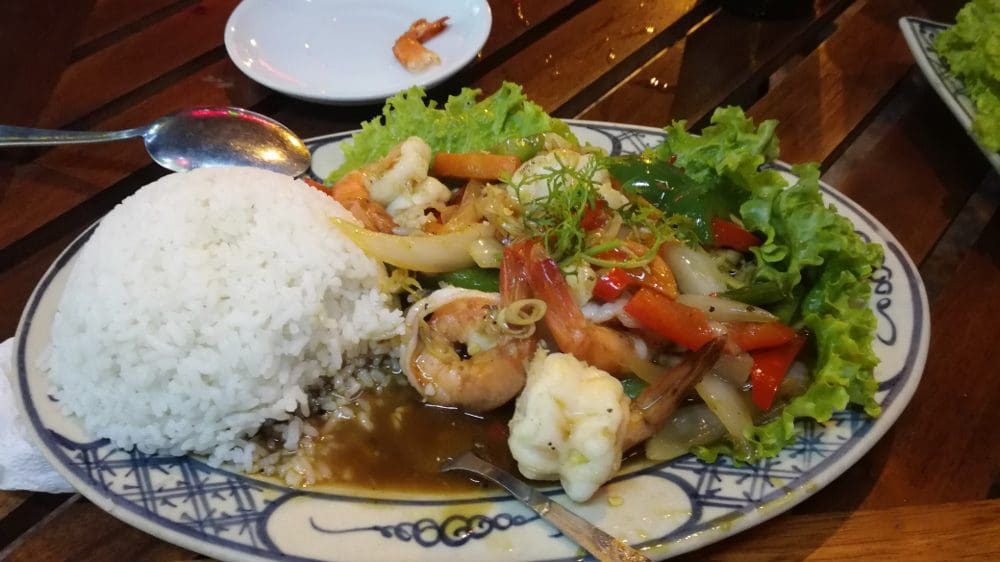 Coffee tastes great and Vietnam is the second largest coffee producer in the world. Coffee is usually served with sweet condensed milk, which goes well with the local coffee. It is reallllly good!

Many restaurant owners are particularly proud for their coffee and how they brew it is a secret. Some seem to add chocolate and apparently when the beans are being grind, butter may be added! In any case it is very tasty and one cup is never enough!

After a few days ride, I must say that my Honda Winner must have the most uncomfortable seat of any bike I have ridden. A real pain it the butt + plus any organ thereabout!

On the positive side, the bike works well and I would not want to trade it with some of the bikes I’ve seen travelers using. It is not just the general reliability but also a safety issue. Besides, it is not so cool to be pushing the bike past ten pubs trying to get it started. Then again, perhaps you make new friends when everyone lends a hand – or a foot, rather – trying to kick start the bike (battery is naturally long since flat).