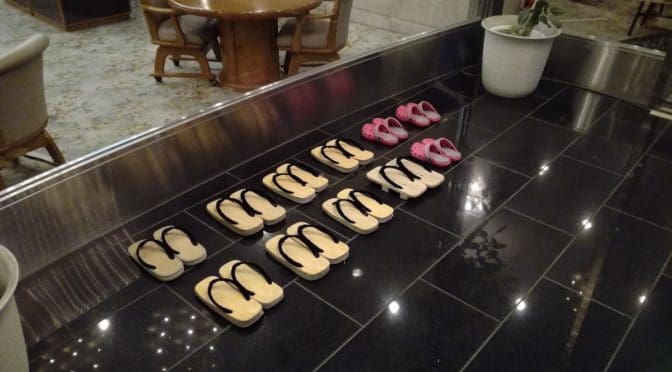 When traveling in Japan, particularly when you venture outside Tokyo, a stay at a traditional Japanese inn, a Ryokan, is a must. This just may be the closest that you can get to a real Japanese experience.

In our case, we set our target for the day to ride around Mt Fuji and to head to the Izu Peninsula and the costal town of Itō for a traditional onsen bath at a local ryokan.

According to wikipedia: ”A ryokan (旅館?) is a type of traditional Japanese inn that originated in the Edo period (1603–1868), when such inns served travelers along Japan’s highways. They typically feature tatami-matted rooms, communal baths, and other public areas where visitors may wear yukata and talk with the owner.” In some other sources ryokan can be dated as far as Nara Period (710–784)

In a ryokan, Japanese traditions capsulate in one wonderful experience – much more so than with a night at yet another chain-hotel.

At a ryokan, traditions must be followed. Shoes off, often even before you reach the reception! If you have not made a booking in advance, think twice how you wish to play this in your cowboy riding boots or boots with long laces (any shoes with laces for that matter)!

Once in ryokan, you will have a comfortable room usually with classic sliding paper doors, tatami floor and a futon bed and even a low table for tea and meals. If you are lucky, you may have some chairs with backrests but with no legs!  You will learn to feel your knees! And off course, you get slippers and a yukata!

Use the Yukata provided, it is a light cotton kimono, which is very comfortable and doubles as a bath rope before you go to the Onsen (with hot spring) or Sento (with hot bath) or even a sauna.

Nakedness is no big deal in Japan and communal bathing is the norm – certainly amongst same sex. Have a look around to learn the process of bathing and washing, which is also particular to japan with buckets and seats…

Ryokans usually serve the traditional Japanese breakfast. Even if they have western option available, try the Japanese. You probably will not have one at your mainstream hotel. They may also have dinner available. Check the availability as it may require ordering in advance.

If you do need to go elsewhere for dinner, it is shoes off in most traditional restaurants with a tatami. Easy enough for a Finn – shoes off, naked bathing, sauna, …

Particularly nice touch was the hand-drawn map of Ito.