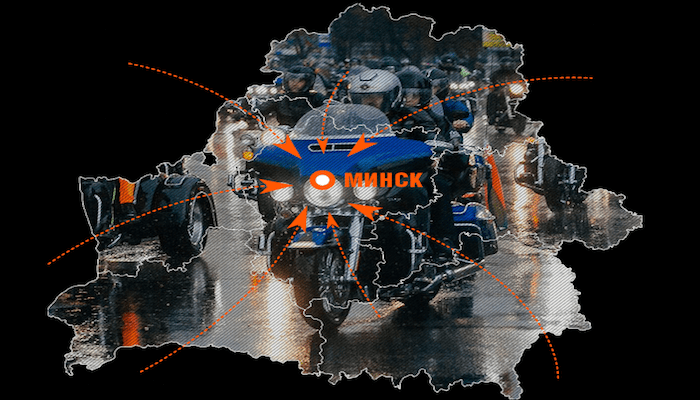 After the 2015 experience, attending the 2016 HOG Rally in Minsk was firmly in my diary for the end of the riding season.

This is probably the biggest festival of its kind, organized for both bikers and general public alike, in the centre of a national capital. Even president Lukashenko himself rode a Harley and lead the parade to the festival site.

If you thought that Belarus is difficult to get to and crossing the border is difficult, you can think again!

Our route took us via Vilnius to Minsk with a total distance between the cities of some 180km on the E28 (or A3 in Lithuania and M7 in Belarus). Border

crossing is only 35 km from Vilnius. The road is very good on both sides with only very few older not-so-even-mind-your-fillings -stretches on the Belarus side. 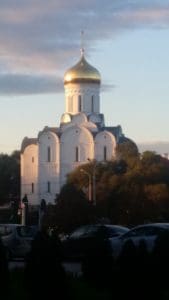 The organizers had done a sterling job and the Belarusian officials at the border knew we were coming. Attending the festival, access to Belarus was visa-free as long as you had the H.O.G. event ticket.

Border formalities were quick and followed an express-lane on the Belarusian side. There are still a few documents to be filled and they are all available at the border. Vehicle insurance green card is mandatory but if you do not have one, you can buy it at the border, costing two (2) euros 2016!

To make things quicker, you can also download and fill in the customs documents beforehand. Just be sure not to loose ANY of the documents you entered the country with – not even the festival ticket as that effectively is your Visa and you also need it upon exiting the country. 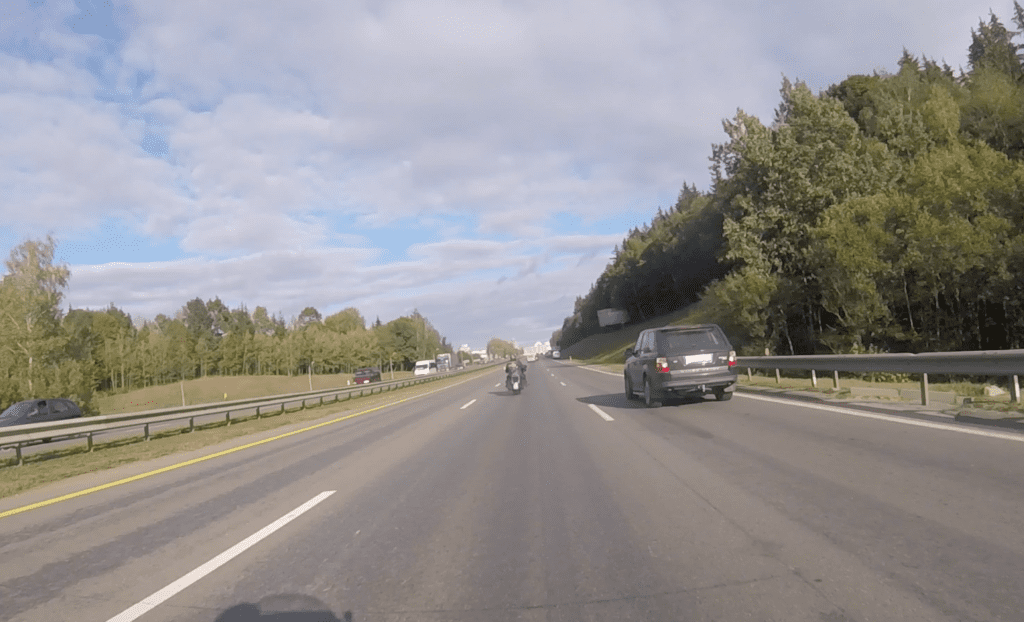 When you approach Minsk, the city just seems to rise from the forest at the end of the highway. There is virtually nothing but countryside until the city high rises start – Misk does not really have suburbs! Regardless of their income or status, people live in flats. And new high rise flats are being built everywhere. Minsk is developing very fast and has a population of over two million.

Minsk is also very modern and a very stylish city. People make an effort to look good and they sure do. There seems to be a lot of money around, at least for some. Outside Minsk, horse pulled carts and Mercedes Brabus’ share the road.

The organizers have selected a few high quality hotels for you to choose from and in my view it is a good idea to stick with the recommendations and to do all bookings as instructed by the organizers on their web site.

The organizers are amazingly quick to comment and to get back to you with any questions or wishes you may have. Be sure to bring with you all the documents you are sent or given, as they may even include instructions to the officials and may become useful if someone has not been briefed properly.

The Saturday Parade starts from the Mound of Glory outside Minsk, east on M2 and runs to Sport Palace Square in the city centre. Mound of Glory monument commemorates Soviet soldiers who fought in World War II and the liberation of Belarus. There is also other war memorabilia on display – tanks, etc.

Minsk has a bloody history during World War II with some 400.000 civilians killed in and around the city. Minsk is a Soviet Hero-City, a title awarded for outstanding heroism during World War II. Only twelve cities in the former Soviet Union have this title and it is worth noting that Minsk was awarded the title as late as in 1974! 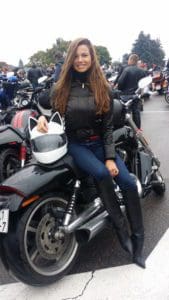 The atmosphere at the start was festive with all the bikes getting organized, rock’n roll band playing and tv-crews with cameras and drones and a helicopter filming the event. The clear indication that parade was about to start was when security teams got busy and started running around. Soon enough president Lukashenko rode to the start line with his son to lead the parade. No trike for this president but a proper HD Ultra Classic!

As one would expect with the road captain of this calibre, the road was cleared before us with police bikes, security team and camera crew were riding in the front with the helicopter touring above us. The parade was four to five bikes wide and remarkably well organised. As it was mainly HOG riders, the drill was familiar to all.

Approaching the city centre the roads were lined with spectators with their cameras, waving to riders. Sport Palace Square is huge area and it was absolutely packed!

There is something unique in the way that Belarus has organized the event as a party for everyone in town. Although this is a Harley Owners Group event and Harley-Davidson brand is in the fore-ground, it is an event for all bikers and for all people.

Huge area for food, stalls, bands, test rides, exhibitions, demonstrations, para-gliders, kids program and a fantastic show put up by the police and police stunt team – surely can’t be ordinary policemen riding like these guys did?  After the show the police PR work and playful interaction with the public was great to see. See their riding in media coverage at the very end of the blog.

The evening continued till late with even more bands and entertainment, ending with a huge fireworks display.

HOG at the new Falcon Club

Another great party – so much going on that it cannot possibly be organised in one place! Some of the Sports Palace Square evening events were relayed by video to the Falcon Club HOG party.

The party had great Belarusian food, the customary chapter presentations and a line-up of local and international bands from classical concertos and modernised folk music to heavy-in-tights, all topped up by my native band, The Rasmus, who gave a brilliant show – made us proud!

The People of Minsk 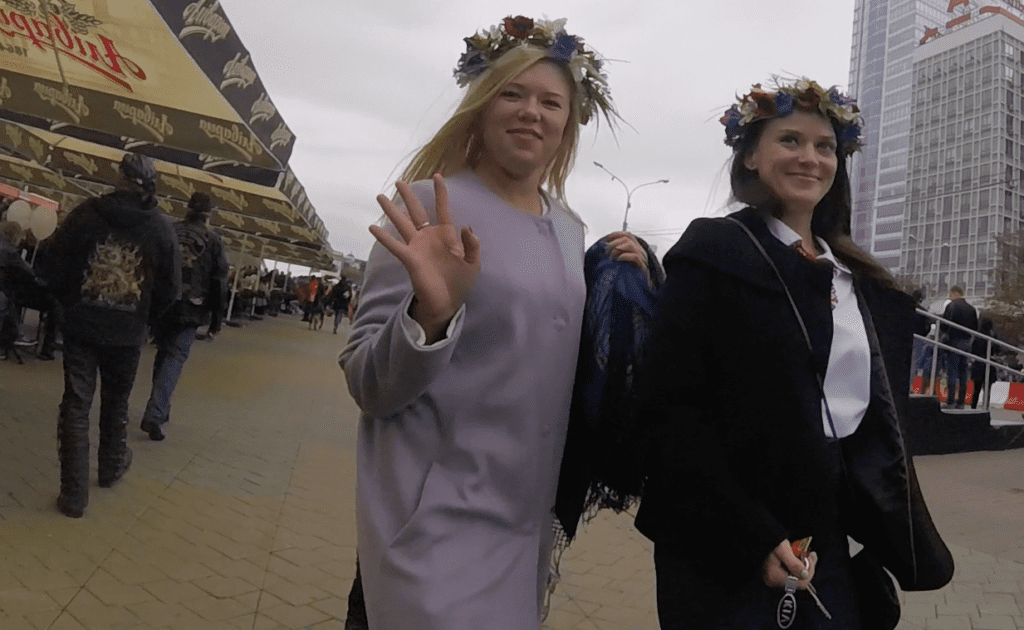 The people in Minsk must be the friendliest crowd ever! They are just fantastic, cheering, admiring the bikes, taking pictures with riders, posing on the bikes – all ages and just all smiles!

Returning home, even one of the border officials asked ”Did you enjoy the festival?” with a wish-I-had-been-there-too -smile.

Great reports from the event by the Belarusian TV. See some great police riding!