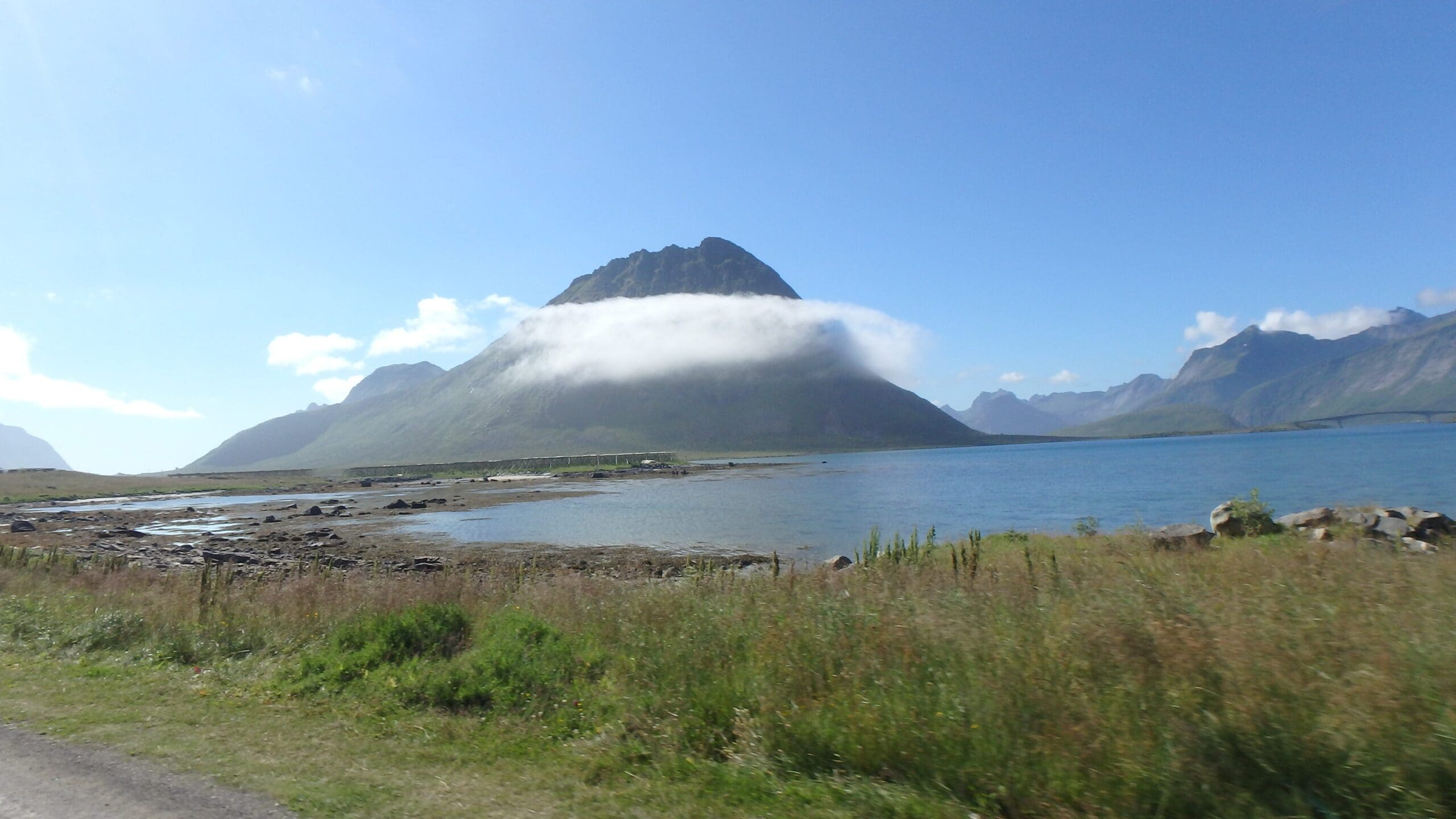 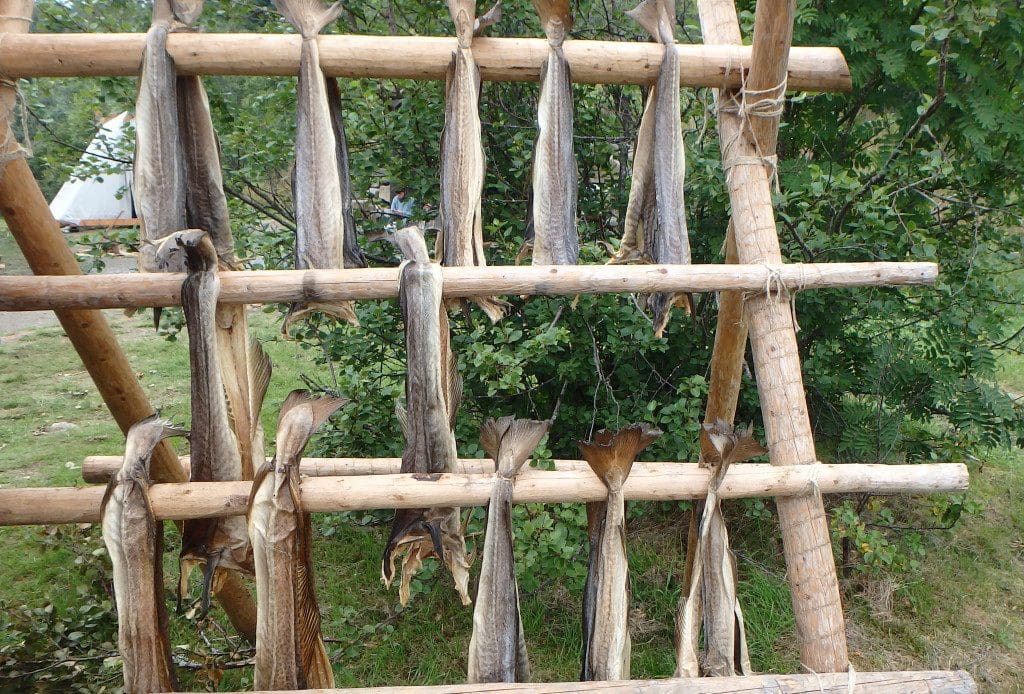 To see the Lofoten Islands in Norway has been one of the must-do trips on my bucket list. Besides Lofoten, I really enjoy riding in the very north of Finland in Lapland – the rolling hills (fells, arctic mountains) of the Reindeer country, which makes the trip even more enjoyable. 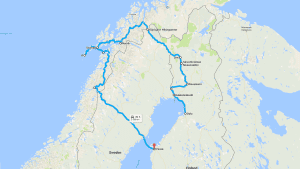 Most would arrive from the south and for the purpose of this Lofoten blog, we ride straights through the country. My preference is to avoid the main (blocked) arteries (like E4) and to select the route in the middle. From Helsinki this would be first to Tampere, then Virrat (to route 66!) – Kuortane – Vimpeli – Veteli – Kaustinen – Toholampi – Sievi – Ylivieska – Oulu. Varying, enjoyable landscape. After a long ride, Oulu as the northern capital is worth exploring and a lively stop for a night or two. Our northern adventure starts here. 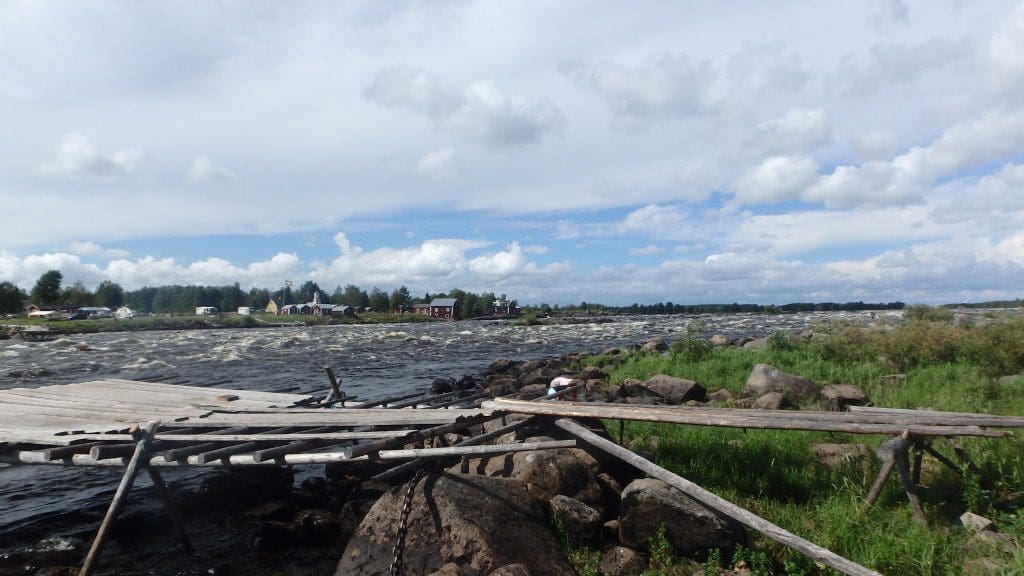 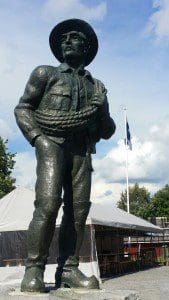 River Tornio is the border river between Sweden and Finland. The river is the longest free flowing river in Northern Europe. Kukkolankoski rapids just north of the town Tornio is a good place to stop for some traditionally prepared – on open fire – freshly caught white fish. 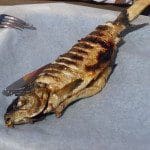 TIP: Arriving from south, continue past the first newer tourist traps further off the main road to the more traditional small village. This place is recognizable by the log floating lumberjack statue right in the middle of the area. There are also some local handicrafts available. If lucky, you may see some traditional lippo-fishig as well. basically a net scoop at the end of a long pole. About lippo and other kind of fishing in Finland click here. 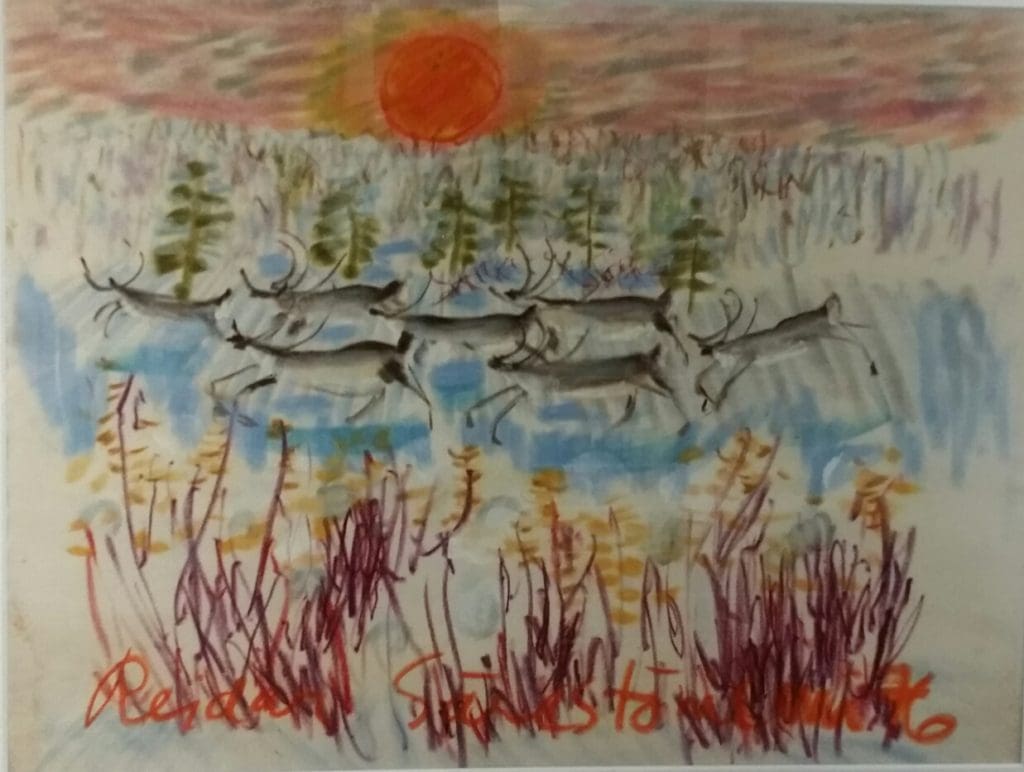 Leaving Kukkolankoski, it is high time to start paying special attention to wild life running to the road. Not just elk/moose but particularly reindeer. This is now reindeer herding area and although each reindeer has an owner, they are free to roam anywhere in Lapland and are relatively wild. 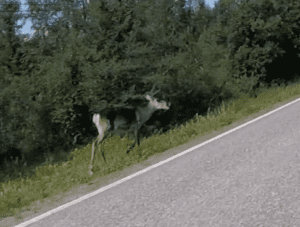 If you want to see the real Santa Claus, now is your chance! Visit Rovaniemi and continue along E75 for the arctic circle Santa Claus Village. Heading north to Levi ski village (or Sirkka), you may want to take the road 79 along River Ounasjoki, which also flows through Rovaniemi.

At Kaukonen in Kittila on road 79, you should make a little detour off a 9km long dirt road (surface easy enough on a touring Harley) to the Reidar Särestöniemi’s atelier and museum. 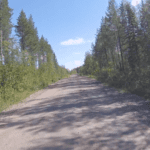 The paintings capture the nature during different seasons in Lapland. 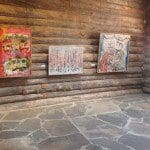 After some artistic influence at the museum, head to Levi for the evening’s entertainment. Levi hotels are very biker friendly and should your ride be a cold one, many offer saunas in your room. Ask for a studio at Sirkantähti, which I have used or Hulu Poro. Summer prices are very reasonable and include big breakfasts.

Eat while in Lapland: Reindeer stew with lingonberry. It is a MUST and available virtually everywhere! Also try reindeer prepared in many other different ways, just ask. And men, do not forget the reindeer antler powder! Women may also want to take some home to their guys…

Kilpisjärvi and Crossing to Norway

From Levi it is only some 260 km to Lake Kilpisjärvi near Norwegian border at the very end of the stretched arm of Finland. This is also from where River Muonio eventually starts and later becomes river Tornio.

At the foot of Saana fell at Kilpisjärvi, there are reasonably many accommodations available but you may wish to book in advance. This is a rather popular area for hikers and nature lovers. From here it is a very short drive to Norway. The land borders between Norway, Finland and Sweden are very relaxed and there are no formalities here either. 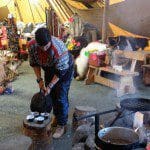 Slowly the fells and rolling hills are getting bigger and eventually more dramatic. You will also ride through many tunnels through the fells. Do stop at a Saami souvenir shop / tents and enjoy a cup of traditionally prepared black pot coffee made on open fire. Here you can sample some more reindeer meat and find even more souvenirs. Reindeer hide on the bike seat or antlers to the front? Both are frequently spotted! 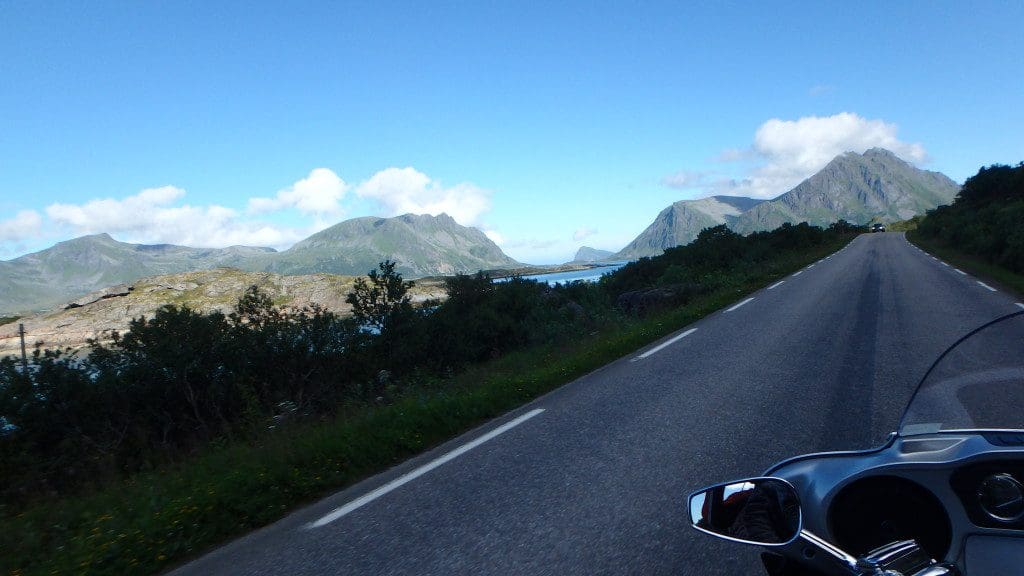 After spending the night in Narvik, a coastal town just before Lofoten, the scenery is even more dramatic and now we are in the mountain country. The sea, islands, bridges, tunnels, dramatic cliffs, magnificent mountains, great road to ride on. We are in biker heaven now.

The closest I can think of to resemble the scenery would be New Zealand. The vegetation is very different but the shape of the land has many similarities. For such northern location above the arctic circle, Lofoten has exceptionally tempered, mild climate. 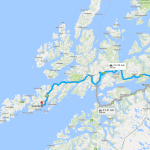 Our fantastic ride takes us to Svolvær in the south, the main town in the middle section of Lofoten islands. The northern part of Lofted islands is left for our next visit. It is amazing how Norway is so densely populated and lively even in the north and these rather remote locations. Svolvær has several good hotels and restaurants to choose from. Actually there are accommodations for tourists practically everywhere on the islands. 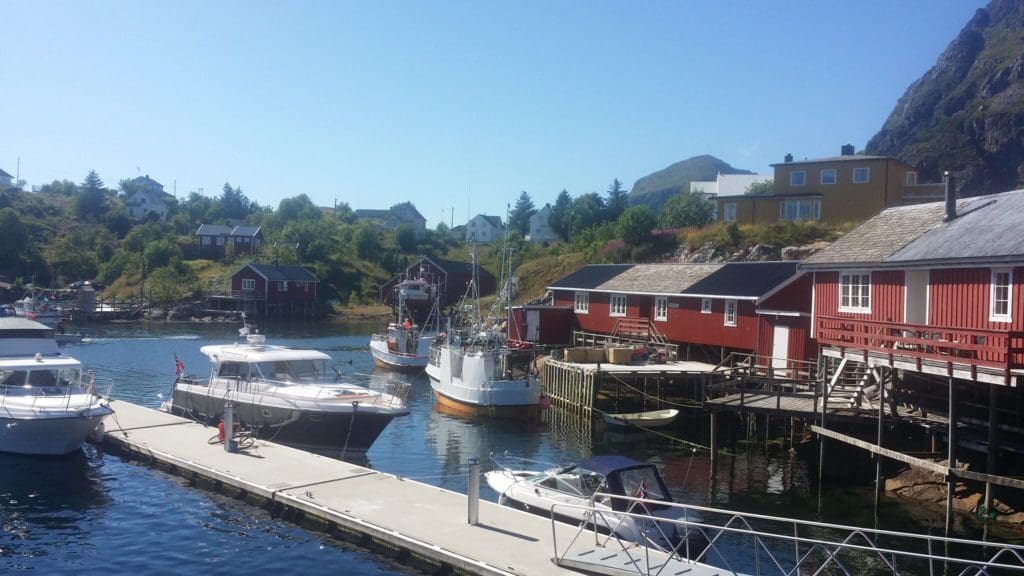 The best views were still ahead of us. The 130 km ride from Svolvær to Å on E10, the King Olav’s Road. Yes, that is the name of the village – just Å or Å i Lofoten. We were lucky and had the most fantastic weather, sunny around 23c and virtually no wind. The ride was absolutely breathtaking! Majestic mountain formations, valleys, seaside and fjord views, villages. The road was gradually getting narrower and ended on a car park turning point. Apparently a popular tourist location with a Fishing Museum and a good base for some further hiking trips. 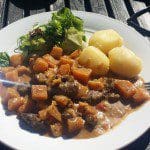 For us it was also the time for some lunch and we chose a cosy, weather beaten restaurant  Maren Anna in the Å village. The restaurant was partly built on the sea and also provided some comfortable looking beach accommodations (Hytte) in the vicinity for travellers.

What to eat on the Lofoten: Whale in many forms – most often stew or steaks. Klippfisk, the outside dried and salted cod which is best when also grilled before serving. 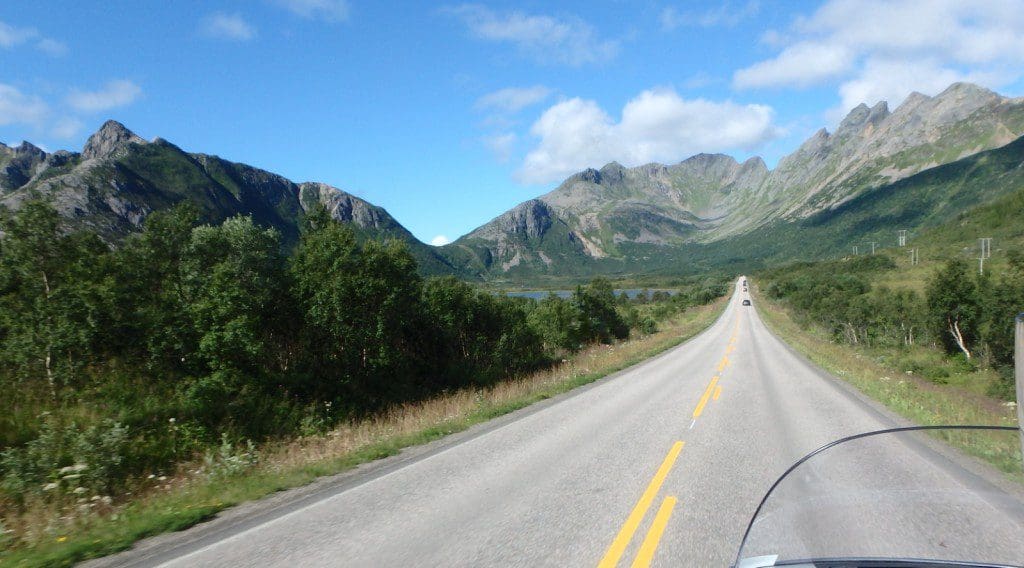 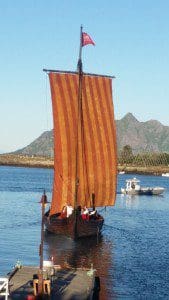 There are two roads leading through the main body of the island when leaving south from Svolvær.  The eastern route along the coast and the western route past the Viking Museum. You should plan to ride both on your ride, although the museum may require a separate day. The museum has interesting videos and displays and a very good guiding system on multiple languages. 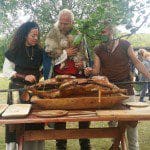 Again we were lucky and a Viking festival was on, which allowed us to explore a viking village set outside by the fjord with ”the real vikings” making handicrafts, cooking food and organizing field games.

Heading Back to Flatlands 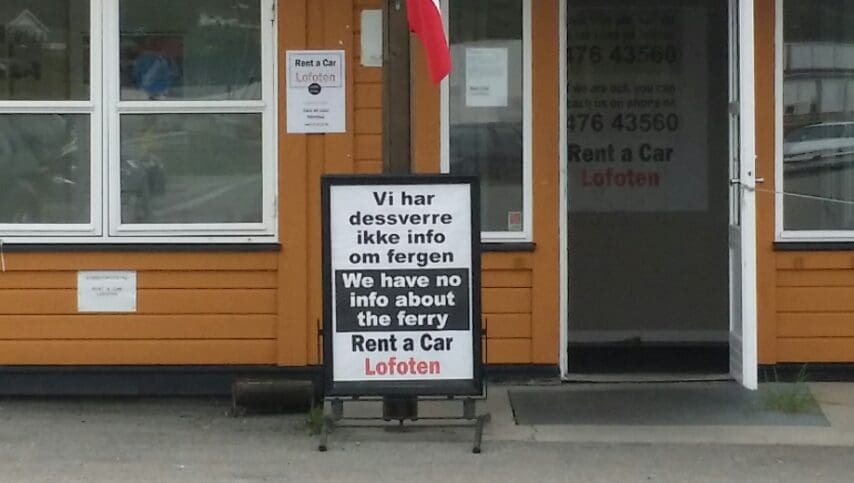 Our ride home started with a two hour ferry sailing from Svolvær to Skutvik, stopping briefly at a small island village of Skrova. The alternative ferry would sail from Moskenes near Å to Bodø. This four hour ferry takes you a bit further south on the mainland. Our sailing was calm but I can imagine that tie-downs are in good use should the sea be any choppier. The ferry is small and the sea is open.

Again, you have several option to choose from, depending on where you want to ride. We were heading through Norway to Mo i Rana and further to Umeå in Sweden, a coastal town by the gulf of Bothnia for a ferry to Vaasa in Finland.

Gradually the majestic mountains turned into fells, then into smaller fells and again into rolling hills before flattening out completely by mid-Sweden. 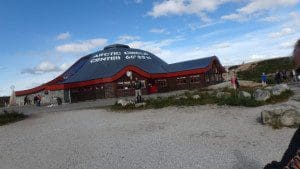 There are some great sceneries on the way though. The higher plain at the arctic circle and some great lake views before you ride through the pine forests to Umeå.

The sailing from Umeå to Vaasa on a rough sea marked the end of our Lofoten adventure and all we had left was the final leg home in the sunshine with some great memories of Lapland and the Lofoten Islands. 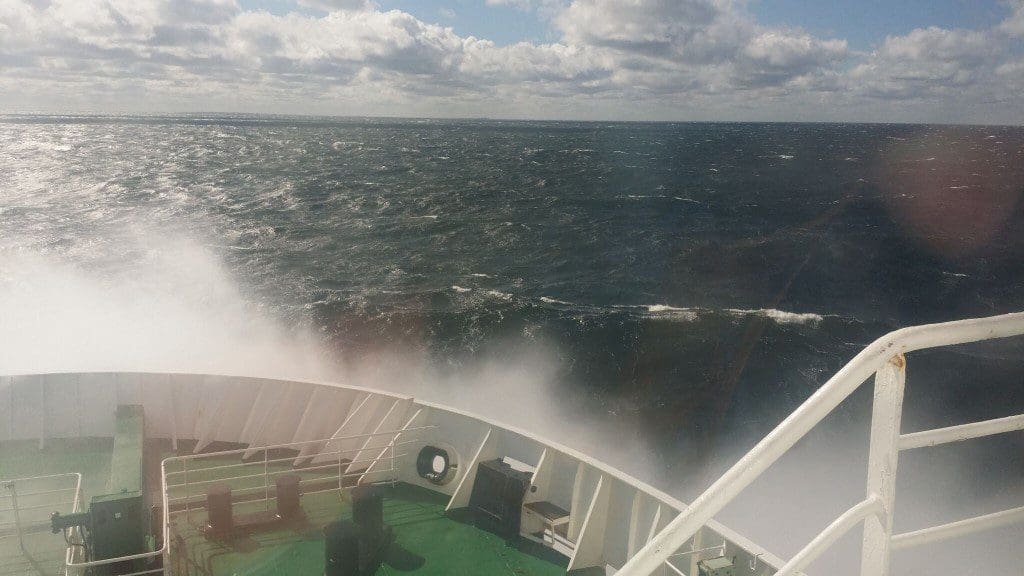